World of 2K38
An Interview with Alister Zamyatin

An exclusive interview with the secretive SpaceX CEO reveals insights into space transport but raises many new questions for the future. 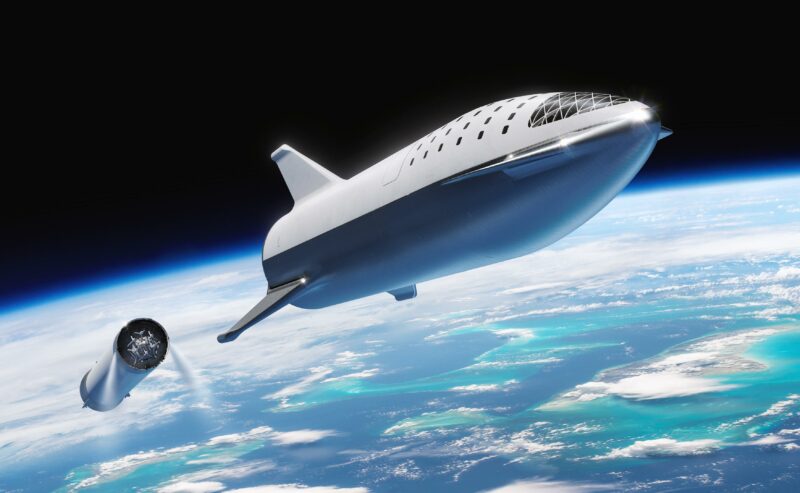 After the tragic death of Elon Musk in the Starship rocket accident in 2027, many wondered if SpaceX could maintain its momentum and reputation as a commercial space organization that pushed the boundaries of human understanding faster, and with significantly more showmanship, than their competitors. The appointment of relative unknown Alister Zamyatin,  notoriously secretive Russian-American billionaire, as CEO and Lead Designer of SpaceX less than a month after Starship caused SpaceX stocks to plummet.

Many feared the notoriously aggressive and paranoid Zamyatin would ruin the creative spark that had driven the company. Over the past several years, however, SpaceX has boomed, in large part due to the extraordinarily controversial “Swords into Plowshares” development program. This rapid expansion of the SpaceX fleet was based, of course, off of the illegal production and launch of four “NERVE” nuclear-powered spacecraft, launched from Lander, Wyoming in early 2029.

TIME: Let’s talk about NERVE. What prompted what some have called “the most flagrant violation of international nuclear non-proliferation in human history?”

ALISTER ZAMYATIN: Before we speak about NERVE, and the ridiculous fear-mongering that has built up about the program, it’s worth first discussing Sea Dragon, and the aftermath of Starship.

That’s right. When I was appointed head of the company, I knew that we needed something new- Elon’s enthusiasm had carried him great distances, and brought human understanding of spaceflight to unprecedented levels, but I felt we were still limited in what we were intending to accomplish. The ultimate tragic failure of Starship merely confirmed that feeling.

I grew up in places where the impact of military technology was very much felt in my life- where the equipment of war had been repurposed to service the peace that came afterwards. And it seemed to me that that same notion- what became Swords into Plowshares- would have to be the guiding principle moving forwards.

You’ve seldom spoken about your childho-

The Sea Dragon was a clever concept developed by an American by the name of Truax back in the early 60s- he envisioned a way to get to space that was driven as much by brute force as it was by brute simplicity. A rocket, conventional in design but not in scope, which could bring gigantic payloads into orbit, was recyclable, and offered a payload cost- that is to say, the unit cost of transporting a single kilogram of any cargo into orbit- that was a tiny fraction of what any competing system.

By scaling the rocket and its engines to a gigantic size- nearly five hundred feet long- and building it from the simplest possible materials with the simplest possible parts- most of it is ordinary stainless steel, constructed more like a grain silo than a rocket- you achieved Sea Dragon. I bought the rights for the concept from Aerojet Rocketdyne in late 2026 and we had the first Sea Dragon assembled less than six months later. The world was too busy obsessing over privacy laws and North Korea to notice.

But how does all this lead to the decision to illegally construct a nuclear spacecraft?

I take issue with the use of the word “illegal” here. At the time of construction, the NERVE units violated no United States nuclear safety laws, and now that they are in orbit they still do not.

They’re advocating them, yes. But ask any private citizen who depends on inexpensive satellite internet or telecoms, or anyone who’s ever boarded a Stratoliner in London and left it two hours later in Los Angeles what they think about nuclear sanctions and they’ll give you an earful, I’m sure.

We’ll get to the Stratoliners in a moment. But back to NERVE.

Humanity’s future has to be beyond the Earth. While we’re busy quibbling about AI and who owns the right to know your shoe size or what kind of pre-packaged MSG-laden slop you enjoy eating, the fact remains that all our eggs are in one basket, and we are too cowardly and intimidated by the power of the technology we need to expand outwards to ever actually use it.

That’s quite an inflammatory statement-

I started the Swords into Plowshares program not long after buying the design rights for the Sea Dragons. I reasoned that, if we are now too weak-willed to utilize our own creations for the purposes of advancing the species, we must turn to an era when we weren’t. We must look back to the most terrible and inhuman weapons we developed during the age of symmetrical conflicts and repurpose them in the age of asymmetrical conflicts to better ourselves.

So NERVE was what, advocating for the use of weapons of mass destruction for peaceful purposes? Mr. Zamyatin, SpaceX illegally constructed four nuclear power plants entirely with private funds and then launched them into space without the approval of the FAA or any other governing body.

You’ve made two very interesting assertions there, so I’ll unpack them separately.

First, the notion that NERVE was in any way tied to WMDs, as if it is still the deaths of the War on Terror. Patently untrue. The NERVE rockets are not nuclear power plants, they are nuclear thermal engines- they use the heat from a bed of fissioning thorium salts- a material which, I feel the need to reiterate, cannot be used for weapons manufacture and which produces significantly less radiation for significantly less time than the uranium or plutonium which drives most conventional nuclear technologies.

This heat causes conventional rocket fuel to expand, creating an exhaust clean of any radioactive contaminant. These engines are safe, powerful, and unbelievably fuel-efficient, and will remain functioning for at least another decade. If treated properly they will function a century from now.

Elon’s rockets could put a kilogram into low Earth orbit for $1100 US. Sea Dragon could do it for 500. Sea Dragon, launching a payload to low earth orbit which is then picked up by a NERVE unit and moved higher can put a kilogram into orbit around the Moon for $200 US. NERVE has made the exploration of space cost-effective for the first time in human history.

Which leads me to your second point, that of government regulatory bodies. I would say the state of the world in 2029 more than justified what we’ve done. The day we launched NERVE 3, the Chinese announced they were stationing nuclear forces in North Korea. The EU was descending into legalistic quibbling, the United States isolating itself through sheer incompetence and corporate control- and if the NERVE program were to shut down, every company in the US and the EU which depend on cheap maintenance of international telecommunications satellites- which is to say all of them- would see their bottom line suffer. Launching the four NERVE ships hurt no one. It cost the US government nothing.

Shuttering NERVE would cost the taxpayers of the world billions, and destroy the personal data economy that everyone seems so concerned with these days. I’d say that’s a fair bit more illegal than what SpaceX has done.

I see. A characteristically… bold statement. But let’s turn to the Stratoliner. You’ve made it no secret that the whole concept is lifted directly from a Nazi German superweapon.

Indeed it is. Silbervogel, a plan for a transatlantic hypersonic sub-orbital aircraft that could take off from France and drop four and a half tons of explosives on New York. The perfect basis for a comfortable and efficient hypersonic passenger transportation system.

Mister Zamyatin, are you aware of how ludicrous it all sounds?

Of course. It’s part of the charm, of course. That’s what Swords into Plowshares offers- the deranged optimism of a more simple era, reforged into something that actually works.

And how does it “actually work” exactly?

Ride a Stratoliner yourself and find out! Our tickets are very competitively priced. But in all seriousness, the process is fundamentally that of a gliding aircraft, but on a much grander scale. Sea Dragon was and still is remarkably inexpensive, but it’s ill-suited for passengers- it accelerates too quickly, shakes them around too much. Stratoliner uses conventional PDEs-

Pulse Detonation Engines. The big boxy things you see on those Boeing and Airbus heavy lifters. We use those as the fuel-efficient first stage, then drop them off and land them when the Stratoliner is about Mach 6- you may have seen videos from onboard where the first few minutes of the flight are very loud, and then they quiet off- that’s the PDEs going. When the craft is up in thin enough atmosphere, we flip over to the rockets- just for a few minutes, enough to boost the craft up to about Mach 21 and push it above the stratosphere.

After that, you glide- that was the appeal of the Silbervogel project. When you’re up that high you just skip off the upper atmosphere like a stone off a pond, constantly decelerating but also covering huge distances on very little fuel- the engines only burn for about the first half-hour of the flight. It’s a whisper-quiet ride, unlike any passenger plane- sure, you have ventilation fans going, but no engine noise, no serious vibration- just the stars and the curve of the earth. As we perfect the system and costs go down, we’re giving travellers the chance to appreciate the beauty of the whole world each time they take a trip.

You’re not concerned by competition from the German SpaceLiner program? They’ve had nearly 20 years of development work to get a head-start on you.

And what has it gotten them? Where are their regular flights? While I’ve nothing but respect for the good people at the German Aerospace Center, they make the assumption that customers will accept commuting out to their nearest rocket launch facility. Stratoliners take off and land at commercial airports. The different in overhead means SpaceLiner just can’t keep up.

On the subject of costs- there’s been some speculation as to where you’ve been able to get the money to afford all this.

I’m not entirely clear what you’re getting at.

The recent NERVE lifting contracts you sold to Russia, for instance.

Roscosmos and the various Russian commercial satellite networks have a right to use NERVE as much as any other paying customer.

Chinese government sources have claimed what the NERVE boosters have been moving for Russia isn’t civilian hardware. Quite the contrary in fact.

All I can say is that Russia has been entirely above-board in their dealings with us, and I don’t appreciate the attempt to turn what should be an apolitical topic- the natural expansion of the human species into space- into a game of political “he said, she said.”

But surely you appreciate that your more utopian concepts seem… well, dated, frankly, compared with the state of the world? Some might even say naïve.

If naivete is what it takes to stay innovate in a world that’s too busy examining its own navel, then I’d rather remain naïve.